Hey there readers, you know that digital service called Steam which was developed by Valve? Well a part from Valve being known to do reasonably high quality digital releases and for their big massive Sales (or some may call them Seals, long story). Well we all know them for different reasons, maybe negative, but also for a lot of positive reasons, and now we're about to know them for another reason. Valve have just announced the ability to share games on Steam with family (you know, the loved ones in the next room beside you). Basically, you'll now be able to share games, which is very exciting, although you won't be able to share all your games if they require a CD Key or have a 3rd party DRM service requirement. Other than this, you should be able to share anything you own, although if there are any other limitations, they'll be stated in the FAQ.

Now, I know some of you will be itching to get access to this new feature, but hold your horses! It actually isn't released yet, Valve will be holding a Beta for it shortly though. You'll be able to apply for a chance to get into the Steam Family Sharing Beta if you join the official group here. Valve will do an announcement within the group once they sending out the invites, you may need to check your steam inventories for any invites which may need to be redeemed, or you could suddenly find some new buttons and other things in your steam interface in the coming days, stay tuned!

It'll be limited to a certain amount of people, and only one person can play a given game at a time. If publishers were already on board with it with the Xbone, I don't see why they shouldn't be on board with it on Steam.

How are publishers on board with this? I assume research has been made resulting in the fact that people won't use it at an extent where it will become a problem to sales, but still. Fantastic feature for the customer.

It's no coincidence. I just work faster than everyone else 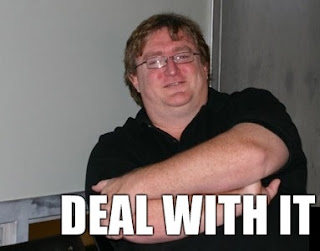 Also, Bob. Is it a coincidence that almost only YOUR stories are made "Hot News"? HUH?! YOU NARCISSISTIC ASSHOLE?! PATRIARCHY!!111

This is hardly news. Our very own CadAttack has been sharing his Steam account for some time now! :D

This sounds good, but how it will work in practice I don't know. Only 1 person can the game at a time, so if the owner of the game wants to be wicked or something, he go on the game the same time as the other person and they get kick off after a few mins.

Definitely a nice idea even while limited to the sharing of a whole library, but devil lies in the details.